Public Policy Updates: January 2023 Board of Education on goal setting

The Board of Elementary and Secondary Education had a special meeting on Tuesday, January 3 at 1:30 pm to hear the report on goal setting that was postponed due to the length of the December meeting. The agenda is here; the video of the fully remote meeting is here.

Commissioner Riley said that it was the job of the Department to set "ambitious yet attainable goals," and turned the report over to Rob Curtin, Chief Officer for Data, Assessment, and Accountability.

In the majority of the parts of the accountability system, there were not large swings in results  from 2019-2022. The one exception is the in student achievement, in which there was a wide variance in the amount of loss. 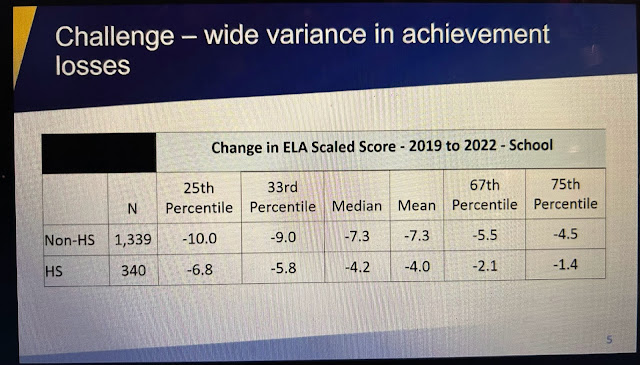 It is the variance within the levels that is a significant outlier from other parts of the accountability system. Never before has the state seen such variance, Curtin said. There are also schools that did not lose ground. Also, Curtin noted that it was not in general historically underperforming schools that lost the most ground. Curtin said that the state must come up with a system that will work for schools that lost significant ground, that lost only a little, and that made gains. There needs to be a system that provides for the recovery as needed while also providing for needing to go beyond 2019 for others.

As such, the Department is proposing two paths: a path to recovery, and a path beyond 2019 and forward. Each school, district, and subgroup will have a full recovery target. We must acknowledge, Curtin said, what has happened over the course of the pandemic. They must recover back to where they were in 2019 before moving on from there. The amount of loss since 2019 will determine the 'time to recover' quartile within which each is placed for recovery. Those in the bottom quartile will have longer to recover than those in upper quartiles with less ground to make up. 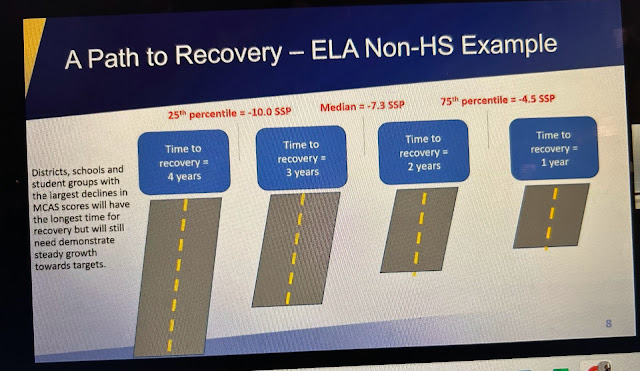 Curtin emphasized "we must show care to where schools are...simply saying that schools need to get back to where they were in 2019 simply doesn't work." He further emphasized that this is a rigorous requirement of schools; it is a bigger expectation of what would have happened under the prior system. The state is emphasizing a "fair and careful approach."

The Board then moved into questions and comments.

Member Tricia Canavan asked if those with the largest losses were reflective of those traditionally lowest performing. Curtin said that it was a mix, with the largest losses "by no means just a list of our historically lowest performing schools." Canavan wondered when the paths would converge, saying she had some real concerns for the students most impacted. Curtin said,"I think it's important that we recognize that those that are furthest behind, getting back to recovery is very much progress," reiterating,"We need to meet our schools where they are right now." He noted,"We have kids coming up into our tested grades right now who likewise were impacted by the pandemic," commenting further, "Yes, they would have a long runway, but I think it's really important to acknowledge what kind of progress that would be." While saying she didn't want to liken this to the Jim Crow South, Canavan nonetheless said the phrase in her mind was "separate but equal." She said with so much funding available, "we should be looking at wildly different strategies." While observing "we have tensions here on local control," she wondered if SOA could be used "as a lever" to require particular favored interventions.

Member Marty West asked for confirmation that the Department would be working to ensure that the targets that are set would be more ambitious than those set under the previous system if it had simply continued. Curtin said that in year one, guarantee they'd be at least as rigorous as the previous system; for the bottom distribution, they would be much more rigorous.

Member Matt Hills said "I want to give you a reaction." He said, "at the end of the day, our success or failure as a Board will be largely a function of how we're moving the needle on student achievement," and "2019 was nothing to write home about." He said "there's a whole lot of money pouring in," but that the federal funding will be ending and the state phase in will be concluding, "and we won't have even gotten to the achievement gap." He said, "this is not a matter of beating up on districts or anything like that...districts have to figure out how to do it." Responding to some of his framing, Curtin reiterated that the historically lowest performing were not those that had the largest losses. Hills asked this question again, and Curtin noted it again. Curin said, "I think that the assumption that schools aren't going to start on that path forward until four years from now" is incorrect; he said, "I wouldn't want to leave the impression with you that 25% of our schools is what's going to happen each year."

Student member Eric Plankey, referencing the statistics course he took two years ago, said his sense was that some speaking were "almost expecting linear recovery," but, he asked, "we keep talking about how unprecedent these drops in achievement are...when we have these...is it possible that these drops might take exponentially longer" to recover? Curtin agreed, saying that we are developing a system within the unknown. Plankey said there seemed to be some common interest in the interventions and supports; Curtin said that the work was being developed in concert with those working on that.

Member Farzana Mohamed used a health care analogy of setting a goal of zero to speak of "how we should be signaling," saying, "what does this say to this family or concerned parent about what our expectation is for those students?" Curtin noted the work leading up to this discussion with the Accountability and Assistance Advisory Council, that those who have lost the most felt these were ambitious targets. He also warned,"I believe we really need to be careful...it's a little like No Child Left Behind was: everybody is going to be proficient."

Member Michael Moriarty said he thought the difference should not be in time but in the urgency of intervention; that much more intervention or guardrails were needed in schools or districts with the largest amount to catch up.

Member Mary Ann Stewart focused on the other aspects of the accountability system, asking if the Department was being really clear about bias and privilege. She asked about interactions with families about absenteeism. Curtin noted that districts may supplement the goals set by the state under SOA with their own, and drew attention to the flexibilities in the past years in the accountability system in response to the pandemic.

Secretary James Peyser, responding to Chair Katherine Craven's observation that this was "absolutely your last meeting," said, "there's always tomorrow." He said that targets really has two purposes: setting relevant targets, but they are also used for accountability system, and sometimes those are in conflict. He said that two or three years sounded like "an awfully long time" to get where we want to go, and theorized about goals for individual children, plus more ambitious goals for third and fourth grade reading.

West noted interest in supports for districts and asks about path forward, as more was said about the other path.
Curtin agreed, that the Department would be going back to 2019 methodology but would increase rigor within methodology. Past performance of like schools was past practice, but would choose a point in the continuum that is more rigorous than that used in the previous methodology.

Stewart noted national state boards of education is taking up this topic in March and suggested some from the Board might attend.

Craven asked about talking about "on your impressions of what the Board has said" at the next meeting.
Curtin noted, "we have to let districts know what their targets are so there is a bit of a time crunch" but that he is happy to work with Commissioner on following up on comments.

The Board next meets on Tuesday, January 24.